Kayaking for Fitness – A Surf Ski Clinic With Bob Putnam 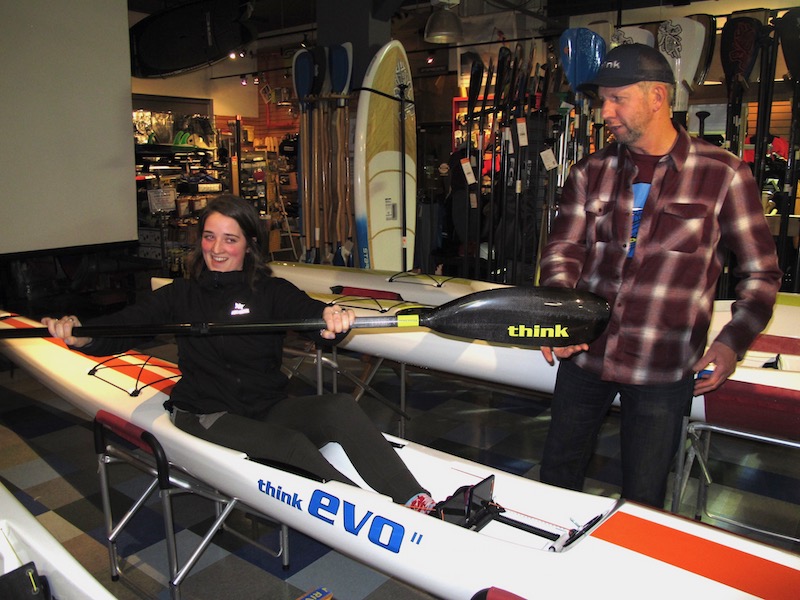 Bob Putnam teaching the dry land portion of the training

Kayaking for fitness has a dual benefit for those who are already kayaking at some level whether a recreational paddler, sea kayaker, kayak fisherman or whitewater kayaker. Not only will you improve your overall fitness level, but you will also improve and fine-tune your forward stroke, which will enable you to paddle further, faster and all with less effort.

Kayaking will work and tone your back, chest, stomach and arms and even work your legs. Executing a good forward stroke is going to incorporate every muscle in your upper body and some lower body as well, and it is a low impact activity that isn’t going to subject your body to the pounding of activities like running. Moving your kayak at speed is also going to burn calories in the order of about 400 per hour, so be prepared to see some weight come off. The final benefit is stress reduction. Lets face it, there is nothing as enjoyable as moving a small boat through the water and enjoying the sights, sounds and the smells of nature as you paddle.

Why Paddle a Surf Ski?

Sea kayaks and recreational kayaks have relatively slow maximum hull speeds and quickly hit a wall as they reach it. Surf skis, on the other hand because of their design, are very fast so you can reach your own limits of fitness, speed and technique without being limited by the boat’s design. Surf skis are also designed to handle rough water as they were originally developed in Australia and South Africa for surf lifesaving. Their narrow design allowed lifeguards to punch out through surf in order to assist swimmers and surfers in trouble. Their speed and under the stern rudders also allow them to catch fast moving open water waves very easily. Surf skis  are also much lighter than the average sea kayak, which you really appreciate when getting them on and off your car and down to the water. 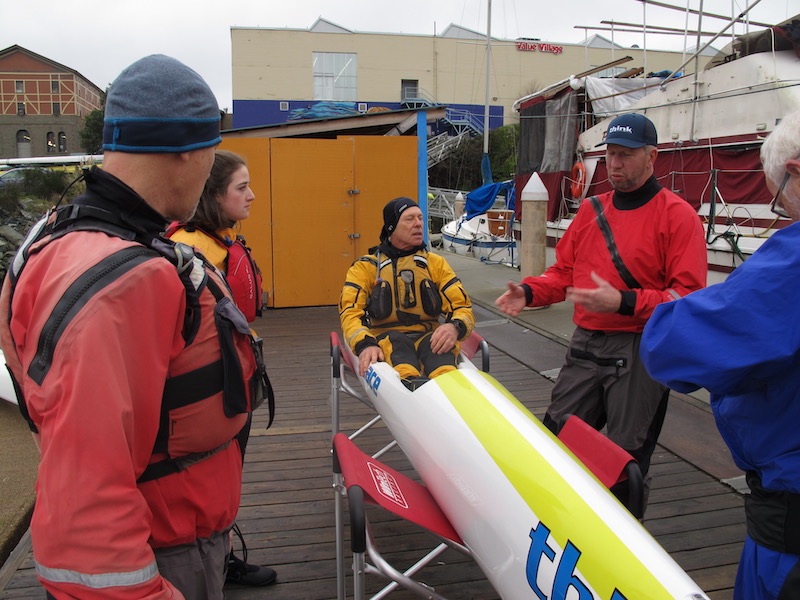 On the ORS docks

Surf skis, beyond the life saving function, were primarily used for competition and were all narrow and inherently unstable requiring a fair bit of skill and practice to master. To some extent this image carries over today. However, surf ski design has come a long way and they are now available in many designs, ranging from stable models designed for beginners all the way to ultra fast models designed for elite athletes. You are also starting to see cross over designs with hatches so you can also carry some gear with you. Because of this, complete novices can learn to paddle a surf ski quickly and comfortably. Indeed your learning curve will be higher in a more stable ski because you will be able to concentrate more on your paddling and less on trying to stay upright.

Along with the surf ski comes learning to use a ‘Wing Paddle’. Wing paddles are quite different than the flatter blade euro designs that most kayakers are familiar with. They are a more efficient design but do require learning a better forward paddling technique. A wing paddle as its name suggests, looks like the cross section of an airplane wing. Water moving over the wing, just like air over an airplane wing, provides upward lift as the paddle moves out and away from the boat due to good torso rotation. This action helps to ‘plant’ and anchor the paddle in the water allowing you to ‘pull’ the boat past it. They claim an increased efficiency over conventional paddles of at least 4 to 5 percent.

This clinic was taught by Bob Putnam who is owner and manager of Deep Cove Kayak located in Deep Cove, North Vancouver. In 1998 Bob started Tuesday Night Races encouraging paddlers of all levels to come out and participate in a series of fun and exciting races each week. Bob has worked hard to promote a strong and involved paddling community and is a very active surf ski racer himself. Bill brings a huge amount of knowledge and experience with him and runs an exciting, informative clinic which will leave you wondering if you ever really new how to do a good forward stroke. 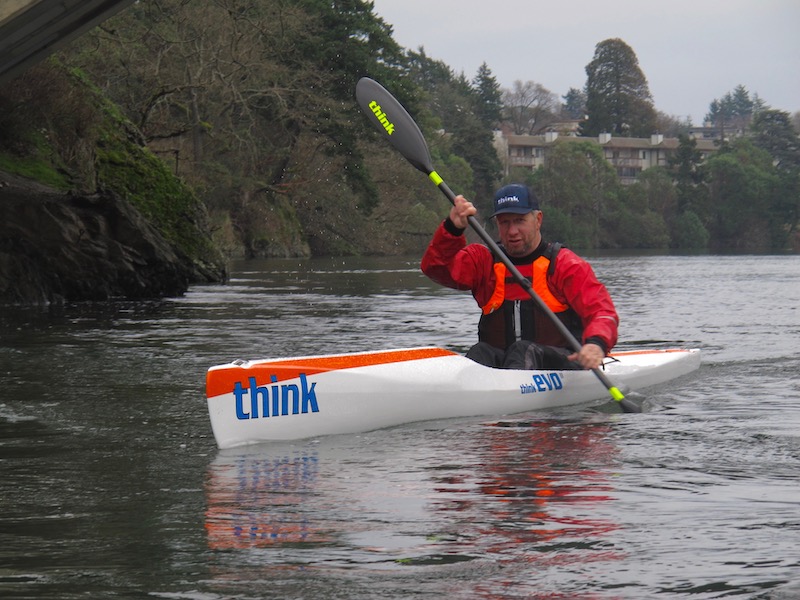 The surf ski clinic covers a lot of basics, like understanding the equipment including surf ski design and the differences between the various surf skis and understanding the wing paddle and its advantages. We learned the proper way to get into and out of them from the dock and shore as well as getting back into them in the event of a capsize, which is something everyone should learn and practice. Just like any kayak rescue, reentry on to a sit-on-top kayak, especially tippy ones, requires practice. Being confident that you can get back on if you fall in will help improve your paddling technique as you will be far more willing to push your limits. 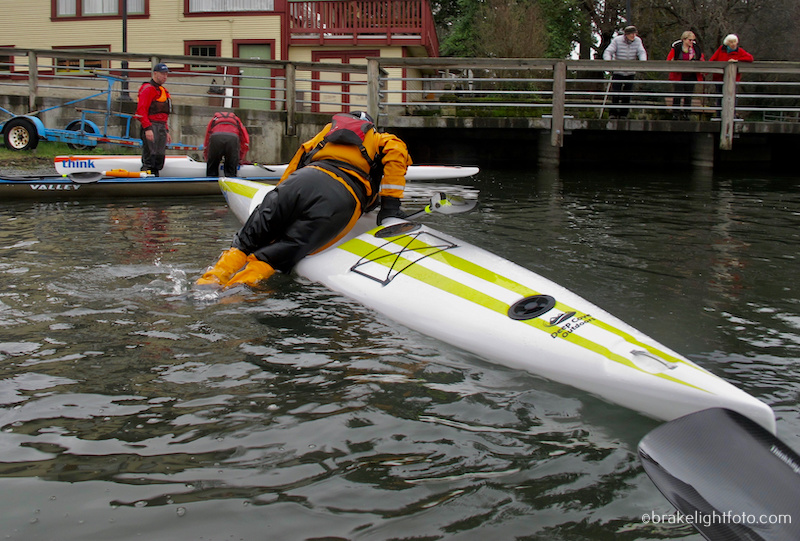 As you can guess, much of the surf ski clinic was spent working on our forward stroke. Bob puts it this way, “the forward stroke is the most used stroke in kayaking, yet it is the stroke we spend the least amount of time teaching and the least time actually practicing and trying to improve.”

The Advantage of the Surf Ski Sitting Position

Good forward paddling technique involves a lot of upper body rotation so you can incorporate all the strong muscle groups of the upper body. Surf skis, because of the cockpit and seat design, allow for really good rotation, not only at the shoulders but also in rotating the hips back in the seat. This is why the seats are not padded. It allows your butt to slide easily in the seat with each rotation. Good torso rotation also allows you to plant the paddle much further forward, extending the power portion of the stroke. 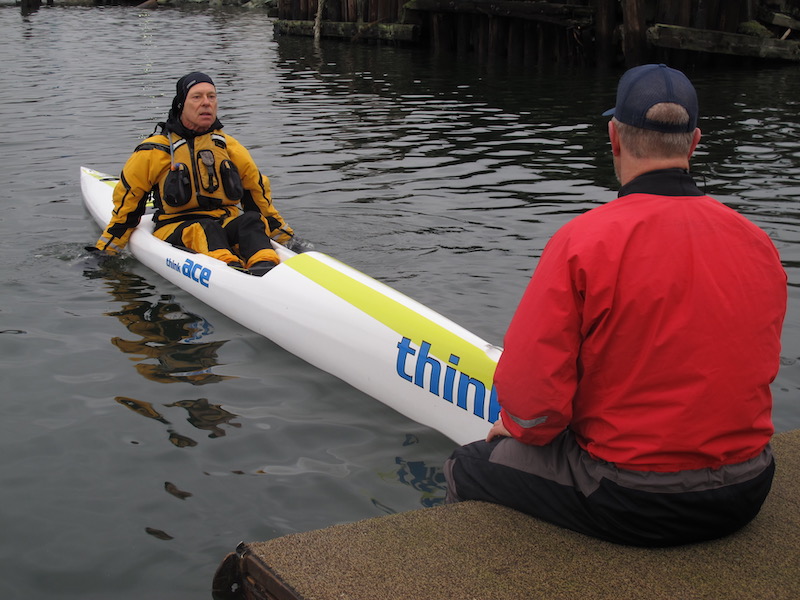 Your sitting position in a surf ski is different from that of a sea kayak or recreational kayak as well. You sit with your legs together and knees up and bent at roughly a 60º angle. Much different than the knees apart sitting position of a sea kayak. This position allows you to drive off the leg getting more power and rotation in the torso. This position may feel a little uncomfortable to sea kayakers the first time out, but it quickly becomes very natural.

The stroke itself is a high position stroke, which keeps the paddle blade more vertically in the water maximizing its grip in the water through the power phase of the stroke. The arms are kept quite straight with just a slight bend in the elbows. The straight arms form a box in front of your torso with the upper arm remaining almost stationary in relation to the body. This enables the upper arm to act as a pivot point to aid in the pull and keeping the blade vertically in the water. Bob describes ‘the catch’ phase of the stroke as ‘spearing’ the water. As you rotate forward, use your top had to drive the blade into the water as close to the boat as possible, like you were spearing a fish. This gets the whole blade submerged quickly. You can then begin the pull, which all comes from the torso rotation, driving off the leg on the same side. You are simply holding the paddle at the desired vertical position and unwinding the torso. The natural movement of the paddle, in this case, is out away from the boat at roughly a 45ºangle and as described earlier, the wing paddle assists in this movement. 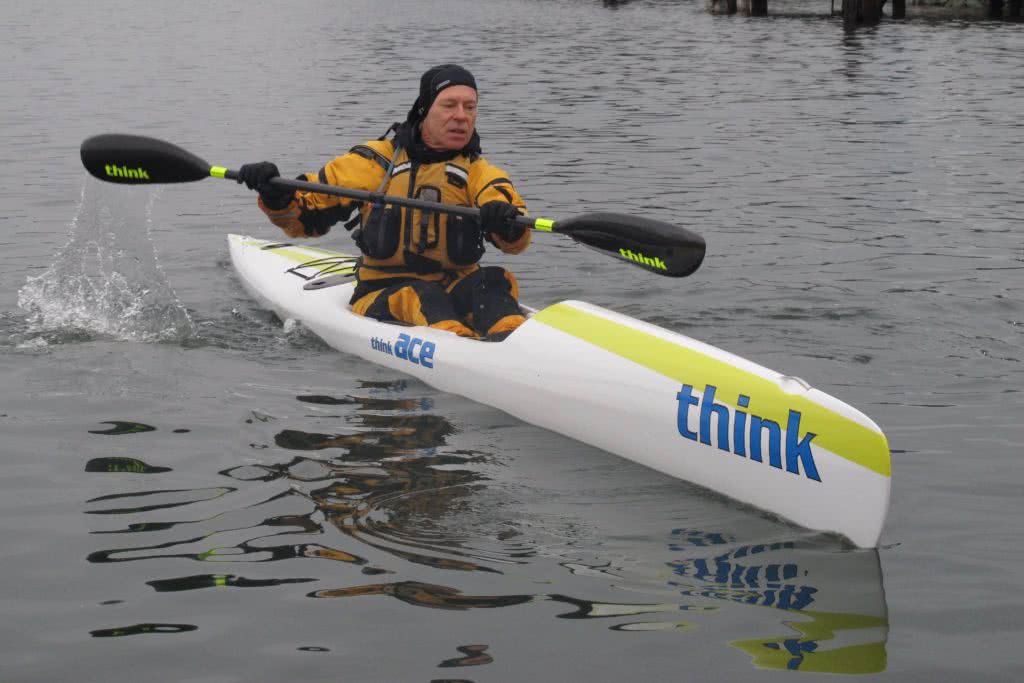 Finally, The blade should be completely out of the water as it passes your hip. Once the paddle passes your hip it is starting to lift water and rapidly loses efficiency.

There is lot’s to learn about the forward stroke and it is an ongoing learning process. Even elite paddlers continue to work on their technique and seek out coaching to improve it. If you want to know more about paddling Surf Skis or just want to improve your technique, talk to the staff at the Adventure Center and watch for future surf ski clinics.  Click this Link to learn more about our courses:  Adventure Center Courses Or call 250-381-4233 or email.

Bruce Holland – You can also catch me at  Ourhomehas6wheels.com or  Brakelightfoto.com 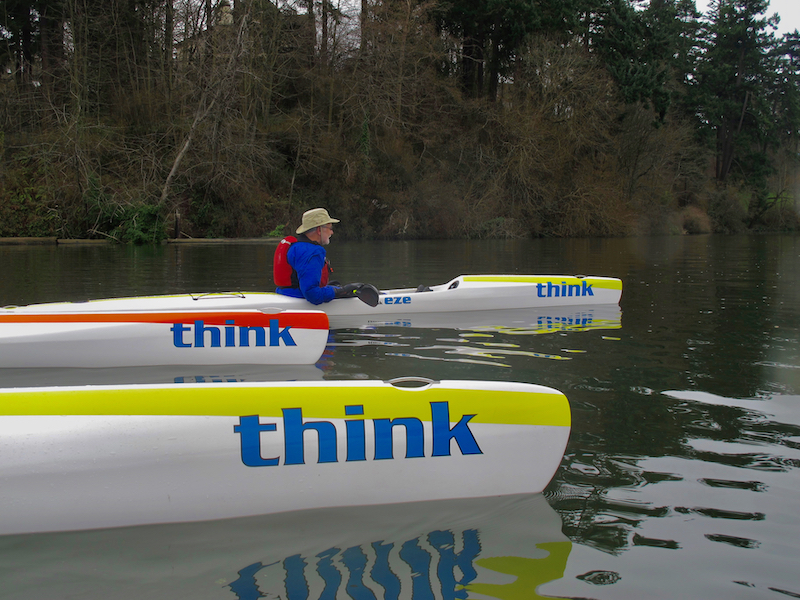