Whitewater Kayaker: The Scents of Adventure 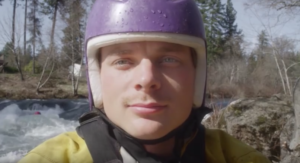 So you just want to be good? Check out this amazing video with Ben Marr

The aroma of a whitewater dirtbag is unique to that of the others. Unlike other sports of similar outdoor persuasions, whitewater does not require the use of one’s feet. Instead, the almost unmistakable aroma of sullied poly-pro base layers can be smelled from miles away by other kayakers. This along with the near permanent effervescence of “wet-doggedness” make for an almost palpable nasal experience.

The consistent roar of rapids is known scientifically as “loud”. With the near-permanent presence of adrenaline in the blood and a humming bird-esque heart rate, a whitewater kayaker will speak to overcome these noises. One will be identifiable with a volume higher than the average wrestling announcer, and able to use a whistle near fluent in Morse Code. 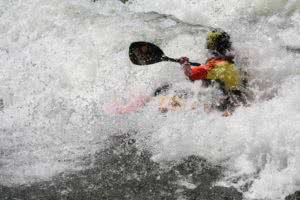 Moist, oh so moist. A kayakers hands are rarely dry for more than a few hours. Wounds gained on the river never heal, blisters never close, and fingernails turn to mush after a season of chasing the perpetual wetness that comes with the sport. The temperature will be dependant on where said kayaker ventures, but the sloppy slug-like trail of river water left behind will be unmistakable.

When one begins to turn whitewater kayaking from a sport to a lifestyle, what they see changes with them. Every body of water becomes a potential source of fun. Given the opportunity, a big enough puddle could be the place to show off a flawless hand roll. Dried up creek beds become raging rivers in the imagination of any kayaker who is looking for the perfect boof rock during the dry season. No longer will a kayaker say “nice car”, but rather “nice rack”, as they look for new means of getting their chosen method of transport to the put-in. The world just looks different through the eyes of a white water enthusiast. 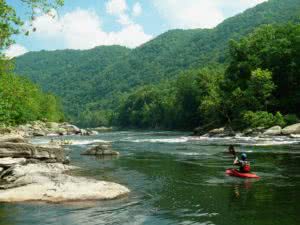 If you are a rock climber, you may be used to the taste of dust, blood and sweat in your mouth. As a skier, it may be the choke of champagne powder flying through the air into your esophagus. As a whitewater boater, the flavours of love are different. The river one chooses will provide the canvas for the flavourful template of your day. It may be sparkling fresh creek water or near-septic runoff depending on your locale and season. On top of this consistent flavour, one will notice fine notes of cheap, warm beer poured generously from an aged river bootie, providing memories of portages, rescues, and lost gear. This is the flavour of devotion.

All adventure sports draw people in based on how they make us feel. Whether we seek adrenaline, companionship and community, or perhaps solitude and a moment with mother nature, we are drawn by a call. The sense of adventure is not a sense in itself, it is a collective of an emotional response to the stimulus provided by our five senses. If your senses are eliciting what has been written here, you may just find that you, too, are a whitewater kayaker.

Embrace it, let it comfort you, shhh, it’s ok.

Now that you know for sure you are a whitewater kayaker check out our top 5 rivers to paddle on around Victoria, plan a Whitewater Kayaking trip, or get inspired with some of our favourite Whitewater videos.